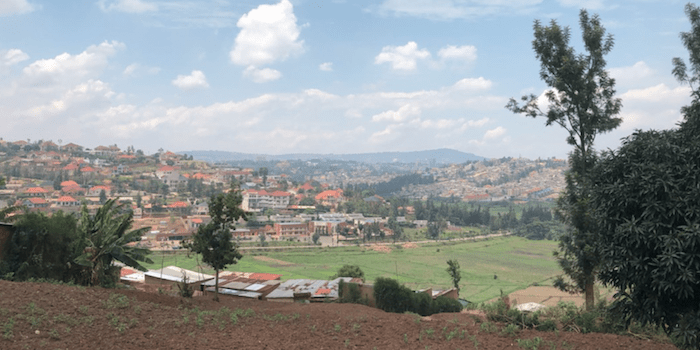 I’d be lying if I told you that the last two months have been a breeze.

The end of the summer has always been a bit of a darker time for me, for whatever reason. But this year I not only went through a bit of a break-up, but I also broke my foot while demonstrating a martial arts move that I USED to be able to do. It was both humbling and humiliating.

The ensuing six weeks were slow, painful, and filled with negative thoughts. I tried to put on a happy face but the truth is I was sad, angry, and feeling stuck.

I allowed myself to become a victim of circumstance. I caved into unhealthy habits and withdrew from my relationships.

I knew I needed to shift my perspective, but was having a harder and harder time creating it for myself.

When the opportunity came to travel to Rwanda at the end of September, I jumped at the chance. While the purpose of the journey was to share my perspectives on teaching and learning, I knew that I would be the one being schooled by the experience.

And from the moment I stepped off the plane I began to feel a renewed sense of wonder. Over the next nine days I met so many people whose perspectives on the world brought light to my own.

I had intense conversations about art and suffering, surviving and thriving. I learned new perspectives on systems of oppression. I caught a different angle of human potential, both for better and for worse.

Every day in Rwanda I learned more and more, and I felt myself growing more unstuck with every conversation.

But it wasn’t until I met Maryam at my hostel, while I was waiting for my ride to the airport to leave the country, that I was shown the map to get out of my funk.

Maryam is an artist who sometimes spends up to 16 hours a day on her pieces. She shared with me some photos of her incredible work, as well as bits of her process, but perhaps most importantly she shared her reason for creating:

“Creating is how I make sense of things. It’s how I survive the complexity, and how I avoid getting stuck.”

The path was set before me. I knew that I needed to create and that writing would be the very thing that would help me get back to the life I want to live. I also knew that if I didn’t write, I might continue to slide into the darkest depths of meaningless consumption. Eventually this path would lead to the demise of my business as a magician and a speaker, and who knows how my personal life would be impacted.

So on the plane from Kigali to Brussels, I wrote. I put a pen to paper and scribbled whatever thoughts came into my mind. I captured stories, observations and insights. Mostly, I wrote about perspectives.

The more I wrote, the more I felt empowered and motivated. I was reminded of a line from Brainsprouting:

I strongly believe that creativity is the key to personal and professional fulfillment, but I also need to be reminded of this sometimes.

So, here are five things I’m going to commit to trying the next time I feel stuck. A commitment to finding my way back to creativity.

One of the best things about magic is its capacity to introduce novelty into others’ experiences. It inspires a sense of curiosity, which leads to the imagining of new possibilities.

I’ve found that being immersed in a new place and space is as magical as it gets. And while I’ve been really fortunate to have travelled to some distant places, the truth is I don’t really have to go far to experience a new environment: Taking a new path for a walk around the neighbourhood, or even practicing yoga in a different place on the studio floor. Introducing something new helps me see my old patterns, and seeing the old patterns is the first step in breaking them.

Recognize the one-sidedness of my perspective

While sitting at a restaurant in Kigali I struck up a conversation with a local spoken word artist. Natasha and I chatted about history and about who gets to write it. When I mentioned that Canada had just celebrated it’s 152nd birthday she burst into laughter: “Isn’t it fascinating how narrow the lens through which we view history can be. Sure, the country of Canada as that old, but there have been people on that land for thousands of years. How much of history is selectively forgotten?”

I’ve since started revisiting the list of “things I know to be true” and asking myself what other interpretations there might be. Is it really the case that I don’t have enough time in the day? Is it really impossible to get up before 6 AM? Will I really hurt someone’s feelings by saying “No” to their invitation?

Seeing another interpretation of my “truth” has been enormously helpful in unsticking. After all, I’m wrong a lot, even when I feel confident that I’m right.

Listen to an opinion I don’t agree with

One of the conversations I witnessed at a restaurant in Kigali really struck a chord in me: Two artists were sharing a table and discussing the responsibility of an artist to share their work: One person believed there was no point in creating if not for the chance to communicate with others; the other person claimed that art should be created for art’s sake, regardless of an observer/interpreter.

The conversation started quite aggressively with hands slapping tables and voices raising in protest, but eventually both parties created space to consider the other person’s perspective. By the end of the conversation, both sides were willing to yield that the other had a valid point, and that they were less certain about their initial positions.

Its inspired me to be more active in seeking out perspectives that differ from my own. Not that I’m committing to abandoning my own positions, but will attempt to understand someone else’s take on the world. A great way to shift perspective is to actually lean into opposition.

When I was in Rwanda I became suddenly aware of how much time during the past 2 months I’ve spent streaming content. Between Netflix and TED talks and cat videos I spent a lot of time on screens.

On the airplane I had the chance to dive into a book for the first time in several months, and within the first few pages I felt inspired and refreshed. Being able to control the flow of the content (by pausing or re-reading) allows me to be a co-creator in the meaning of the material, whereas my other consumption habits leave little to the imagination. Reading inspires possibilities, and is a great way to get outside my perspective and spurn the imagination into gear.

This has been the overwhelming lesson for me from this experience. When I find myself feeling stuck I often spend less time creating and more time consuming.

As was reinforced by so many of the people I met in Rwanda, creating is the key to a sense of purpose and meaning. And being able to write my thoughts for 30 minutes made such an immediate difference in my sense of empowerment.

Next time I’m stuck, I’m going to spend less time worrying about what exactly to create, and I’m going to get myself writing (or sketching, or sculpting, or painting, etc) as fast as I can. Creating is meditating, and is essential to my continued growth and development.

There they are: five ways to get unstuck. I’m hoping they’ll serve me well the next time I find myself in a bit of a rut, and perhaps they’ll serve you too.